For a few months, the idea had germinated in me to place the year 1998 under the banner of the centenary of the birth of marguerite, my grandmother. But I didn't know how to proceed.
The organization of a great Magritte retrospective at the Royal museum of fine arts of Brussels, Belgium, give me the idea to associate these two characters both born in 1898 and who mutually and so superbly were anaware of themselves.
Of course, I readily admit that the parallel between René Magritte and my Grandmother Marguerite hardly goes beyond the year of birth and an easy consonance but what one wouldn't be able to do for the sake of a beloved?
Of Magritte, an artist of international reputation, I will not say anything: I invite you ,as you surely do, to go and consult the numerous sites devoted to his life and his work.
Of Marguerite my grandmother, because of his remarkable discretion, I will restrict myself to very briefly report the existence.

Born on march 26th of the year 1898, at midday, married at 23, heartbroken by the death of a son at 30,widow at 41, years spent in a flour mill, repairing rough bags then, retirement before the last departure, on tiptoe... Such was her life. She who was awkward with the phone, did not believe that men did walk on the moon ground, in short, who doubted about technology, would be more than astonished to see herself exhibited to the whole world throughout the world-wide-web.
Of René Magritte or my Grandmother Marguerite if one cannot say with certainty who had the most beautiful life, one knows at least who has the greatest mediatization, who is the most famous. This is why I found fair that René's fame benefits Marguerite -died since many years now- a little.
I hope that you, looking for Magritte and finding my grandmother Marguerite, will forgive me that little trickery. May I be allowed to introduce Marguerite my grandmother to you throughout these few photographs, poor traces left by a human being who was very dear to me, together with some «cyber-collages» of my composition, a mixing of some pieces of my work with her image. For her influence on my work is to me as large as that of René magritte or Kandinsky. 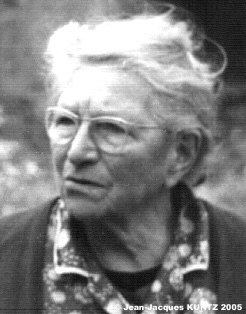